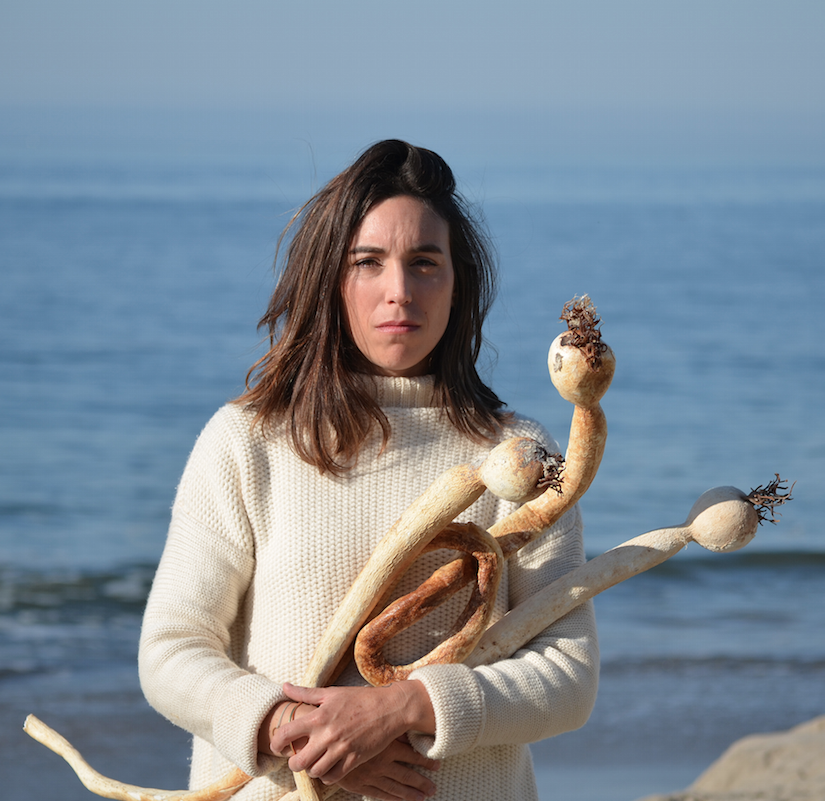 Kalie Granier is a French interdisciplinary artist based in California. Her artistic practice explores life below the surface and the interdependence between humans and non-humans through Ecofeminist values. She questions the links between our underwater environments, their ecosystems, and our human bodies in the new geological era to raise awareness of social and ecological imbalances, while imagining alternative narratives for a more equitable future. Her research lies at the intersection of art, science, and activism, with a focus on marine plants and relies on a close dialogue between scientists and environmentalists. Her ecological commitment is omnipresent in her creative process as she experiments with video, performance, up-cycling of local natural material gleaned from the beach, and the use of raw pigments in earth-based painting. Using emotions as a guideline, Kalie Granier pursues a quest for collective consciousness and regenerative togetherness.
She is the co-founder of Loud Spring, an Ecofeminist Art Tank based in San Francisco.
vvv
Kalie graduated (MA) from the ESAG, Penninghen School of Visual Art in Paris. Her work has been exhibited in several Galleries and Museums in the US and Europe. ProArts Gallery (Oakland California), The MAH Museum, Radius Gallery, Seymour Museum (Santa Cruz, California),  836M Gallery, re.riddle Gallery (San Francisco), Galerie Linz (Paris, France), Museum Centre del Carme (Valencia, Spain), Es Baluard Museum (Palma, Spain), Loop Festival (Barcelona, Spain) and LA NAU Cultural Center (University of Valencia, Spain)…